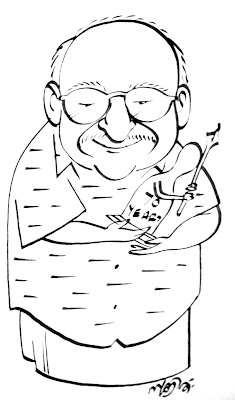 This caricature of Cartoonist Yesudasan was presented to him by Sujith, Kerala Kaumudi daily cartoonist on June 12, 2008 - 70th birthday of Yesudasan.
Posted by Design & People at 11:05 AM No comments:

'Educational sector in shambles in Kerala'

PTI Kochi, June 12, 2008: Senior Congress leader, K Karunakaran, on Thursday alleged that the educational sector is in total shambles in Kerala, causing anxiety to students about their future. Speaking after launching a website on the life and cartoon drawings of renowned cartoonist Yesudasan, www.yesudasan.info at a function here, Karnukaran asked "is there a government in Kerala?."

"When we glance at daily newspapers, we can only see the verbal fight that is going on between the ministers. They have no time to solve the issues of common people," he said. "Chief Minister is a good person, but he behaves as if he has not seen many things that are happening," Karunakaran said, adding there is not enough foodgrains for the people here, but the ministers have no time to look into that.

'The present situation in the state is ideally suited for cartoonist', Karunakaran said in a lighter vein. Without naming any political party, Karunakaran said 'two political parties are betraying each other and in effect they are betraying the state of Kerala', he said. Dr K S Radhakrishnan, Vice-Chancellor, Sree Sankaracharya University of Sanskrit, Kalady, presided.

Cartoonist Yesudasan, who is working in the Malayalam daily 'Malayala Manorama' replied to the felicitation.
Posted by Design & People at 10:29 AM No comments: 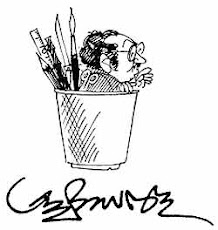